Women Orchestra is an artistic and musical reality that sees over thirty musicians united by a single purpose common to all: to tell a world that belongs to each of them. Each musical section, strings, woods, brass, percussion, is inhabited only by women. A natural census, that one of Women orchestra, which led women, even unknown to each other, to join, to ask to be there: for women from all over the nation. And it is a nation, ours, that has hurt and killed our women.

WOMEN ORCHESTRA project was born from this compact and cheeky union of courageous musicians, an all-female organic that sees the first appearance on a stage in November 2017 at the 'Lena' Theater in Cammarata (PA) with an event organized on the occasion of the day against gender violence. From that moment on, the group continued its rise by participating in numerous concerts first in Sicily, then nationally up to the boom obtained in the broadcast 'Tu si qui vales' of Canale 5 last September 2020.

“A natural census, that one of Women orchestra, which led women, even unknown to each other, to join, to ask to be there”

Then, on the last Dicember, the orchestra was the guest for 'Eu.Web.Awards' at the Teatro Verdi in Pisa, for the awarding of the best websites of the year, an event promoted by Eurid (Bruxelles). On April 2021, the orchestra became the spokesperson for another awareness event, the World Earth Day where it made a musical tribute together with the recited voice of the actress Stefania Blandeburgo.

On 27 August the orchestra will be the guest of a singing format, 'Io Talent Europe', in Latvia, for a European tour that includes 16 stages in which different talents from all over the world will perform. On the jury Riccardo Fogli, Beppe Vessicchio and internationally renowned artists. 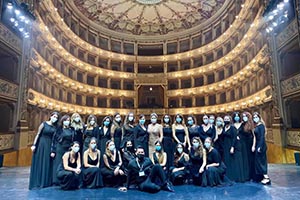 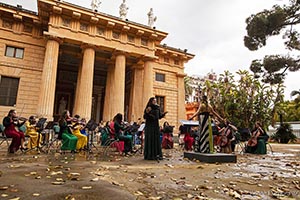 Video
🍪 We use technical cookies strictly necessary for the proper functioning of the site. The duration of cookies is strictly linked to the work section, or they can use a longer stay time in order to remember the visitor's choices. Info